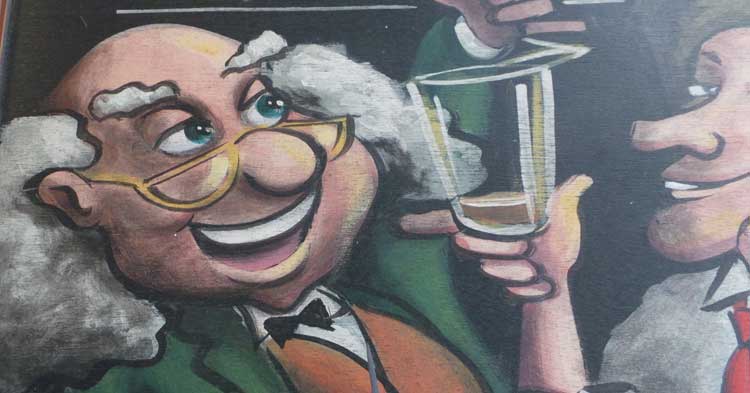 LET'S ALL GO DOWN THE STRAND - BANANAS OPTIONAL

Let's all go down the Strand - Have a banana
I'll be the leader
you can march behind
We'll stop off at five pubs there
to see what we can find!

The Strand is, and always has been, one of London's main thoroughfares, an artery that connects Westminster with the City of London.

Once upon an age, it was lined by fine mansions and palaces, the gardens of which swept gracefully down the the River Thames. Gradually, those magnificent abodes were reduced to rubble, and public thoroughfares sprang up on their sites.

It is those streets that you will be exploring on the Strand pubs treasure hunt.

And what a feast of fun and discovery awaits you!

FROM SHERLOCK HOLMES TO ALFRED HITCHCOCK

This treasure hunt has it all.

We have, for example assembled a stellar cast to pop up and assist you with your challenges.

There is, for example, a pub that is dedicated to the memory of Sherlock Holmes, whose sleuthing skills will be required if you are to ferret out the solutions to the mysteries and conundrums that will be set you as you make your way around the pub treasure hunt route.

And, as for Alfred Hitchcock, well, he was the master of the type of suspense you will, no doubt, be feeling as you race through the final thirty nine steps of your treasure hunt, deciding whether you should go north or northwest to cross the finishing line and end the quest as the man, or woman, who knew too much to be beaten by the other teams!

As it happens, the finishing point will be a pub that was featured in his 1972 film Frenzy - and there will, no doubt, be plenty of that as the teams battle to cross its threshold and emerge as the victors of this particular treasure hunt.

HAVE I GOT BOOZE FOR YOU

Since this is a pub treasure hunt, the pubs are, perhaps, the most important ingredient to be stirred into the mix.

Well, in that respect we've selected a real mix of hostelries, each of which has bags of atmosphere and plenty of character.

From the aforementioned pub that is dedicated to the memory of Sherlock Holmes, you will make your way to a lovely little hostelry that commemorates one of the most popular members of the Royal Family of all time.

Having twisted your way through a delightful sequence of backstreets, you will emerge onto Strand to visit a timeless tavern that was once a favourite with the actor Richard Harris and which an actor from a previous generation established a club for men whose wives would not allow them to sing in the bath!

A short walk through a further set of curious thoroughfares will bring you to your next pub, one that is named for one of this nation's greatest military figures, a man whose gift for strategy should provide a goodly amount of inspiration in planning your final charge, which will take you through the streets of Covent Garden to end your Strand treasure Hunt at the pub that enjoyed that starring roll in Frenzy.

Here, the teams can relax as you open your answers envelope and mark the sheets to find out which happy few, which band of brothers (and sisters) has emerged victorious from the melee to be crowned the winners of the Strand Pubs treasure hunt.

THE OTHER TEAMS ARE OUT THERE

But do not, under any circumstances, be lulled into thinking that it is going to be a walk in the park - largely because we don't actually go into any parks!

You must never forget, should never forget, that the other teams are also prowling the area, each of them on the look-out for the solutions to the clues and the answers to the questions.

But, who will find them first? That is the question.

You will need to deploy your resources sparingly, plan your strategy with military-like precision. Holmes-like levels of observation and deduction will be an essential part of your arsenal, as will be the ability to think about the tasks that are set you and plan how to solve them in the least possible time to give yourselves the maximum possible advantage.

Where on Strand you can find a Metal Billiard Maker?

What was the first public building in the world to be lit throughout by electricity?

Where the Wolf Club used to hold their meetings?

Don't worry, by the time your band of warriors abseil down the walls of the final venue (alright that's a bit of an exaggeration, as you stroll through the door of the final venue), and collapse in a heap of mirth in front of the bar, the answer to every one of those questions, and many more besides, will have been found.

Indeed, you'll end the treasure hunt with such an abundance of fascinating facts and/or useless information that you will be the scourge of the dinner-party circuit for years to come!

PERFECT FOR ALL OCCASIONS

So, whether you are looking for a team building activity, or a social event that will get yourself, your friends and your work colleagues out onto the streets of London and into some fantastic pubs, then let's all go down the Strand where you will discover for yourself that the past is often a lot closer than you might imagine.

WE ARE CURRENTLY NOT OFFERING THE STRAND PUB TREASURE HUNTS AS SOME PUBS ARE RESTRICTING ACCESS TO THE CLUES.

The cost of the Strand Pubs Self Managed Treasure Hunt Package is £140.00 for 4 packs.

The treasure hunt cannot be started before pub opening times which are generally midday.

THE ROUTE WAS LAST CHECKED ON
14th January 2020