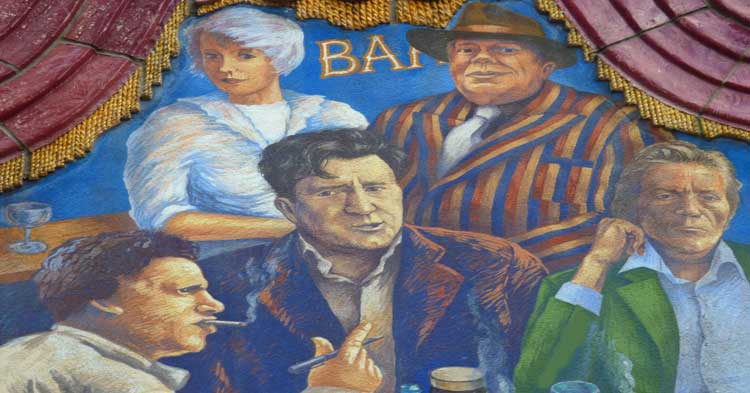 TO BLUSH OR NOT TO BLUSH? THAT IS THE QUESTION

Like a retired maiden aunt, whose youth took in the thrifty fifties and the swinging sixties, Soho has seen and been it all.

Once upon a time it was an area of green fields which were a favoured hunting ground of royals and aristos alike. It was their cry of "So-ho," meaning "the hare is found" (I know we're also struggling to work that one out!), that gave its name to a district that grew to become London's aristocratic, artistic and intellectual quarter.

The likes of William Hazlitt, (who he?), Lady Mary Wortley Montague (who she?) and Alexander Pope came to live here (and, in the case of one of them, die here too), whilst later Charles Dickens, Karl Marx and even the Beatles sought inspiration in its cosmopolitan courtyards, and tucked away alleyways.

INFAMOUS AND NOTORIOUS, BUT ALSO FASCINATING

It was once home to some of the most notorious strip clubs in the country, and, to this day, vestiges of this less than salubrious past stand cheek by jowl alongside more respectable modern businesses such as 20th Century Fox and Bloomsbury, the publishers of the Harry Potter books, whilst dedicated followers of fashion still flock to Carnaby Street in the hope of capturing some of its heyday magic.

Yet Soho has never lost its village feel and, to this day, it is still a curious mix of homeliness and sleaziness. Cool Britannia and Rude Britannia rolled into one.

WHAT A GREAT LOCATION FOR A TREASURE HUNT

In short, so much has gone on (and come off for that matter!) in Soho that it is the ideal area in which to set a London Treasure Hunt and our Soho quest immerses you in the past, present and not too distant future of this fascinating and vibrant quarter.

And boy are you in for a voyage of discovery as you pick your way through the streets, alleyways and thoroughfares in search of the solutions to an array of cryptic clues, observation questions and cunningly concealed photo challenges.

HIGHLIGHTS OF THE SOHO TREASURE HUNT

You'll get the chance to follow the fashions on Carnaby Street as you seek out clues and challenges amongst its trendy(ish) shops and boutiques.

You'll pass the studio where Elton John recorded his first hit, Your Song, and where the Beatles gathered to sing the "nana na nahs" for Hey Jude.

You'll see the home of the man who created the modern Vampire story.

You'll soak in the colour, spectacle and sheer vibrancy of Chinatown.

You'll see ancient streets and old, old buildings that have withstood the march of time, and which cower away in the backstreets where only the dedicated wayfarer can discover them.

BEST OF ALL YOU DON'T NEED TO KNOW THE AREA

As is the case with all our quests you don't need to have any prior knowledge of the area, nor of the history of the area to enjoy and complete the Soho Treasure Hunt.

Indeed, as we stress over and over again, knowledge of the area can be a severe disadvantage as it tempts you to presume you know what the clue is saying rather than following the clue visually.

An enquiring mind, the curiosity to explore tucked away courtyards and subject all the buildings passed en route to close scrutiny, are the only necessary tributes to complete the Soho Treasure Hunts and emerge victorious unless, of course, another team was more enquiring and scrutinised the buildings with greater intensity!

YOU CAN EVEN STOP OFF FOR A DRINK IF YOU WISH

Although there are no pub stops on the treasure hunt itself, it does pass a wide, and varied, mix of pubs. There's no harm in resting your weary legs for a time as you ponder your options and prepare to launch yourselves once more upon the streets of Soho.

And, let's be perfectly frank about this, good team building is all about a group of individuals showing themselves able to rise above the foibles that the exercise throws at them, and being able to work together for a common cause during which all hurdles encountered, all wrong turnings taken, and all humiliations endured, are overcome with a spirit of dogged determination and an attitude that sees the constant call to action being one of "can we fix it? Yes we can!"

Well, that's the theory at least.

The cost of the Soho Self Managed Treasure Hunt Package is £140.00 for 4 packs.

Outside Exit Six of
Oxford Circus Underground Station
Outside The Argyll Arms Pub, on Argyll Street.